Hello hello. Do we have any soil geeks coming?
I’m one of the organisers of Science Hack Day and the science hacking community in Berlin. I was once a molecular biologist but have been mainly organising and community building in recent years. However, I want to get my hands dirty again and I’m gradually working my way up to a potential new project around urban soils. I’m trying to learn about DIY soil testing, bioremediation, permaculture practices, and the politics of land-use. It’d be nice to do a bit of tinkering around soil ecology at the weekend (I’m there from Friday on) – @dusjagr said he’d be into the idea too

.
Unfortunately I’m not so well prepared, but I’m going to use this thread to share a few ideas. Suggestions very welcome!

most important… bring a shovel!

i have just been visitng this ecosystem research station up in finalnd, and met Janne, a super enthusiast researcher and DIY soil chamber builder. we could try to get some tipps from him. but in the end it’s pretty straight forward anyway.
while the one above is quite adcanced and remotely controlled, we can build something much simpler.

i saw a few of those prototypes on my visit to the photosynQ crew:
https://photosynq.org/instruments

looking forward to some testing!
i source some co2 sensors for next week.

My name is Janne and I just signed up for this forum. We indeed met with Marc at SMEAR II station in Hyytiälä, Finland. My background is in forest ecology and micrometeorology. I have not built many chambers myself, but I have been using a dozen of different ones, as well as calculating the fluxes from the raw data, upscaling, and interpreting the data. Also I have been organizing chamber calibration workshops, in which researchers all over the world have brought their chambers for specific tests. We have also designed and built a specific laboratory equipment (or two) for this testing. Based on this, I should have some insight.

Building a soil respiration (CO2 flux) chamber indeed is in principle simple. There are some basic principles that should be followed in order to get scientific results, though. On the other hand, there are many things to be considered in order to get good (=mediocre) scientific results out of the chambers. I list here the process in scientific perspective. It does not need to be that serious, but thinking about all these aspects helps to get better results:

All of the points above affect the results (even the publishing process). There is no such thing as objective data. In principle, I should be able to help in all the steps.

The list is long, but don’t get disencouraged! Often it’s best to just start doing things, especially when doing stuff when you have no idea what you are doing (this is why I love science)!

To add to the list, there is also CO2 profile method. This method is suitable for long-term measurements (from some days to years), which this message is dealing with.

The text below that I just wrote is quite technical and surely I forgot to mention some of the key things that are necessary to understand what this is all about.

HOW TO MEASURE SOIL CO2 CONCENTRATION?

This method requires some tubes to be buried underground. The tube should be solid, but the part of the tube that is underground should be drilled with small holes, and wrapped into some material that is porous but blocks sand from going inside the tube. Now the gas concentration in the tube underground settles to the same as the gas concentration in the soil airspace. Gas can be sampled via the tube, and analyzed later. This is a very efficient way of sampling large areas quickly.

There are two interpretations of CO2 flux (gas transport).

Transport coefficient (K) varies spatially (in space). Usually it is modeled, but this takes time and requires information on the soil and some theoretical knowledge. For larger areas with several measurement points, a literature average could be used to get one average number. The funny thing is that K can be very easily measured. I think the reason why no-one in the research community does not do it, is because in theory K also varies temporally (in time). This means that it should be constantly being measured. However, my experimental results in Hyytiälä forest shows that it does not change much at all! This means that it only needs to be measured once (per year or whatever), by using chambers!

CO2 profile method is a low-cost method of estimating CO2 production of soils. The interpretation of the data may be tricky, but based on my experiments, the issues can be solved by measuring the transport coefficient. This would mean that soil CO2 production could be measured in places where it has not been done before.

15 years ago the price of any half-decent CO2 analyzers was in thousands of euros. I would very much like to know what can we get for less than 100€. The sensor may well be the most expensive component of the chamber system, and I think it makes sense to base chamber development based on the sensor.

In chamber measurements, the key is to measure CO2 concentration change vs. time inside the chamber. Depending on the sensor/analyzer and the measurement subject, one measurement can take 1 minute or 30 minutes.

Other than price, important criteria for CO2 sensor are resolution and precision (repeatibility and noise). Accuracy (actual level of the concentration) is not so important, because in chamber measurements all that matters it the change in concentration. Measurement range is also important, and in some cases response time as well.

There are in principle three ways to measure CO2 concentration change inside the chamber airspace:

Method 1 requires a small sensor. They can be cheap but otherwise perhaps not so good. 1 operational chamber needs 1 sensor. A larger external CO2 analyzers are usually much better, but also more expensive. It may well be that cheap small sensors are more than good enough today. Method 3 has the benefit that less equipment is needed when working on field. This method is also quite laborious. Method 3 allows using several different chambers at the same time.

I would be more than happy to evaluate the specifications of different CO2 sensors/analyzers for chamber/soil concentration measurements.

*In some cases it is not necessary to circulate the air back to the chamber from the analyzer.

hello forum, hello pannu
about the co2 task; a pretty impressiv progression here http://www.climeworks.com/
might an conference to them in the retreat…? we shoul figure out… see you there

local expensive store. but we can still order and deliver tomorrow.

i just got this hint…

I used the CO2 sensor one year ago with Pi zero, and updating real-time
(every 2mins) data can be find here. http://sensors.yanwu.me/
Yanwu

naaaiice.
so i cancel my order from distrelec.

I strongly recommend using a small fan inside the chamber to mix the air. Installing the chamber to the soil can cause overpressure, that flushes the gasses in the soil and causes disturbance (storage effect, in this case flux != CO2 production). A separate lid on the chamber helps a lot. If there is no separate lid, a vent tube is highly recommended. It is a tube drilled to the chamber. The idea is that when the chamber is gently installed (or “closed”), the pressure stabilizes via this tube.

The response time of the sensor available is <90s, which is quite long, but it should not be a problem as such. However, ventilating the sensor directly might reduce the response time considerably. Accuracy of 200ppm does not sound very good, but on the other hand like I mentioned in a post earlier, accuracy is not important, but repeatability (within one measurement) is.

If the signal is too strong considering the range (0-2000ppm; and random noise and response time), you can make the chamber taller. This way the CO2 concentration increases more slowly in the chamber airspace. On the other hand, a low chamber gives stronger signal, and makes the measurement time shorter. However, this makes it more difficult to estimate the actual* airspace volume inside the chamber, and the fan causes more disturbance to the soil.

*This is a nasty problem.

Just to make clear, unfortunately I am not participating your event physically, but if you have any questions about flux calculation or anything else, just ask. I hope this information is somewhat useful.

How about this as a fan… Too much disturbance?

Great that @gaudi already has one of those grove sensors!

How are we going to calibrate this thing? I was at least thinking about bringing some Berlin soil for comparison (probably not very scientific though)…

That fan looks huge. However if you can adjust the voltage, it should be fine. The flow should be as gentle as possible (considering the effects to the soil airspace CO2 reservoir).*

HEUREKA! * However, if the chamber has a separate lid, then this should not be a problem. The soil gets into stationary state in a couple of minutes (in a way). In this case, first install the chamber with the fan, let the system stabilize for 1-5 minutes, and then close the lid. These things have been on my mind a lot, but it was during writing this message that I understood how the measurement must be done:

Install the chamber + fan without the top part (lid) and wait that the soil + chamber system will be in a stationary state. (no CO2 production is accumulating in soil airspace = soil CO2 concentration in the soil airspace is constant when the measurement starts = no storage effects = CO2 flux equals CO2 production (respiration)). Then install the lid of the chamber horizontally (vertical installation could induce pressure effects). Then measure the concentration change in the chamber airspace. If you have trouble calculating the actual flux in real world units, let me know.

can someone please bring some immersion oil?!?
then we could watch soil bacteria/fungi/etc with the 100x objective…

will be on my way soon. see you in the evening!!

Got some news from our friends at our-sci… he is more actice over at the openhardware.science forum
check their new device:

Determining Soil Organic Carbon with the Our-Sci Handheld Reflectometer Background and Rationale: In the atmosphere, excess carbon contributes to global climate change. In the soil, which represents the largest potential sink for atmospheric carbon,...

and slowly planning for a Soilathon and Forest Geeking session in March-April, Switzerland.

slowly getting into this soil-geeking topic again!

test_NDIR_sensor_working.jpg1167×723 228 KB
borrowed the NDIR sensor from @gaudi and got it easily running, in combination with a little I2C OLED screen.

@Pannu when do you have time to visit us in switzerland in spring? i’d love to do a hack-weekend/sprint on building some forestry-sensing soil analysis prototype. @lu_cyP also has more friends from Berlin interested in the topic.

i just met the people from the company Cool Co. and they have just been releasing and producing this garden&soil or weather monitoring and control board, aka the La Cool Board. ESP 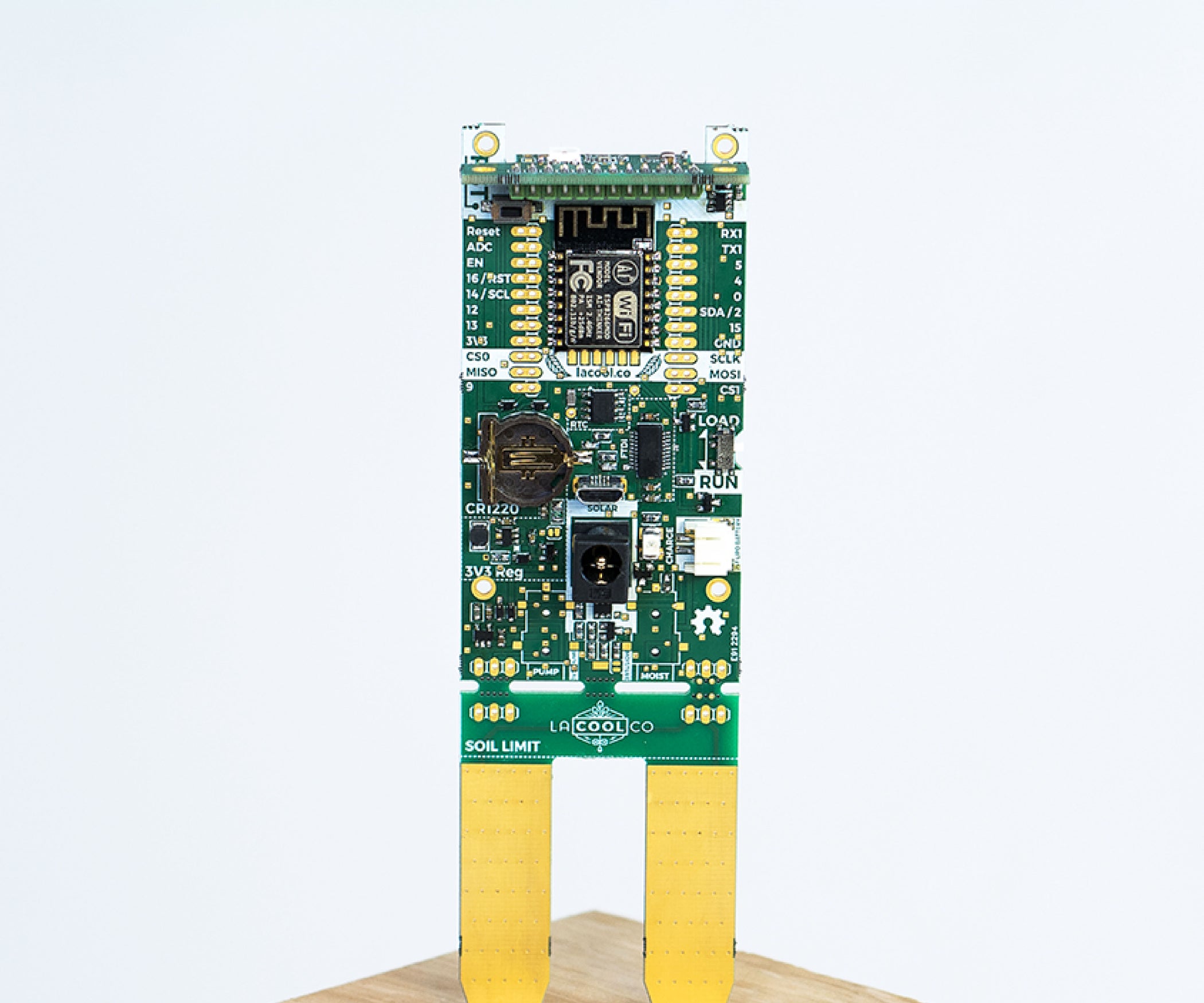 Getting Started With La COOL Board

Getting Started With La COOL Board: Introduction"When we came up with the idea for La COOL Board, I imagined a mix between an Arduino with WiFi and a modular agronomic weather station. It had to consume very little energy for autonomous operation and...

i bought one 99eur and have been talking a lot to the developers here at La Pailasse. 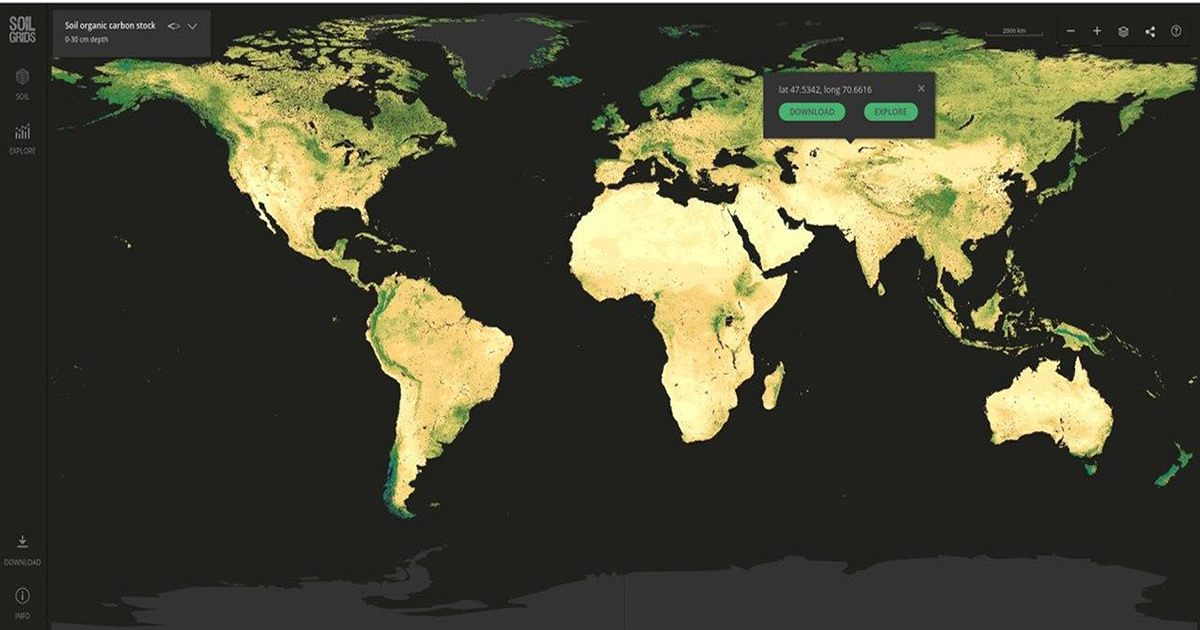 SoilGrids250m 2.0 - A system for digital soil mapping based on global compilation of soil profile data and environmental layers